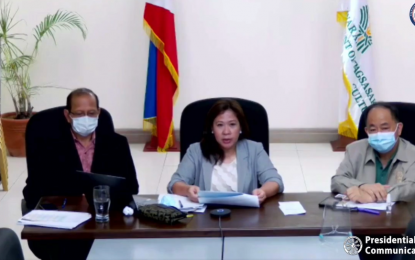 SECURE. Agriculture Undersecretary and chief-of-staff Cheryl Caballero shared in Friday’s (Jan. 29) virtual briefer that the DA has secured 1.62 million metric tons of rice for 2021 which is valued at PHP24.26 billion. The official said these were through the strategy of DA Secretary William Dar to ensure food security amid the series of challenges that the country is facing. (Screengrab of Caballero [middle] with DA Undersecretary Leocadio Sebastion [right], and DA Undersecretary Rodolfo Vicera [left])

MANILA – The Department of Agriculture (DA) has projected 1.62 million metric tons (MMT) of additional rice production which is valued at PHP24.26 billion to attain a national yield of 20.44 MMT this year.

“This is coming from the intervention made last year with the distribution of inbred and hybrid seeds to rice farmers. It was purposely made to top-up the achievable production based on last year’s data,” DA Undersecretary and chief-of-staff Cheryl Caballero said during a phone interview on Friday.

It showed that 943,793 bags of hybrid seeds were distributed to 395,130 farmers. These were planted in 728,890 hectares in various parts of the country for the first phase of the risk resiliency project (RRP1). For the second phase of RRP, some 361,022 farmers were recorded as recipients to which they planted in 478,787 hectares.

Caballero shared that the DA sourced the fund from the Rice Competitiveness Enhancement Fund (RCEF) and General Appropriations Act.

For his part, Agriculture Secretary William Dar said that the more than 1 million MMT increment in rice production is a solid guarantee they will reach 95 percent rice sufficiency level.

“Last year, despite perfect storm which includes the eruption of Taal Volcano, the Covid-19 pandemic, the African swine fever, and the series of typhoons, the country managed to attain a 19.4 MMT national yield. Pinakamataas sa history ng rice production sa bansa (highest in history of rice production here),” he said.

Dar said the import level for rice is starting to go down as local production continues to grow with interventions and assistance for seeds, fertilizer, and capacity building.

He also noted the efforts of the farmers, fishers, and stakeholders for positive growth posted by the agriculture sector in 2020.

Through their “One DA” holistic approach, the agriculture office said it will continue to roll out projects to empower farmers towards a food secure and resilient Philippines.

The RRP which was started in May 2020 was allocated with a PHP8.5 billion fund under the Plant, Plant, Plant Program in 16 rice-producing regions in the country.